The postal history of Sudan is a rich and varied field for the collector and specialist alike. The following is a very brief outline of the main areas of study.

Covers are know from the mid 1840’s when explorers and merchants travelled up the Nile towards Khartoum. Items of mail to and from Italian merchants, minor explorers (John Errington) and John Petherick (the British Government’s representative in Khartoum) were privately carried and bore no Sudanese postal markings.

In the 1870’s and 1880’s mail to and from General Gordon, Baron Rudolph von Slatin, James Grant, Carl Giegler and Romolo Gessi was sent via the Egyptian postal system operating through territorial offices in the Sudan. 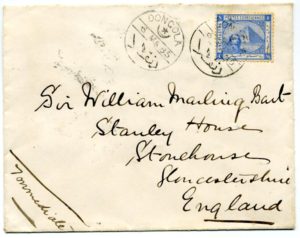 The first post office opened at the port of Suakin on the Red Sea in 1867. During the next six years other followed at Wadi Halfa, Khartoum, Berber, Dongola, Kassala and Massawa. The postal system was administered by Egypt and Egyptian stamps were used until Sudan issued its own stamps in 1897. 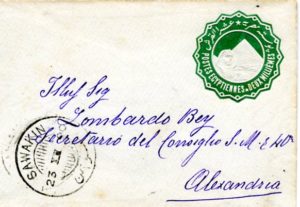 The period 1883-1899 saw a huge increase in the volume of mail sent and received, mostly by soldiers serving in various campaigns. Officers’ and soldiers’ rate covers (many with original letter) exist from the Nile Expedition to relieve Khartoum and from operations in the Eastern Sudan in 1884-85.

The former includes the Canadian Voyageur contingent and the latter Indian troops and the Australian Contingent.

Indian troops again served in Sudan during 1896 with mail sent at the soldiers’ concessionary rate and extensive correspondences exist from the Dongola Expedition of the same year. 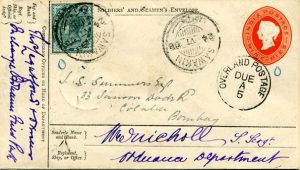 Mail from the Nile Expedition of 1897/98 provides the collector with early TPO covers posted on railways and steamers, frankings of provisional issues and ‘camel’ stamps from a range of post offices, postage due mail, original correspondences, letters signed by Kitchener and Haig, ‘wreck’ items and covers to unusual destinations.

Campaign Mail from Border Areas and the Lado Enclave

Mail from Uganda, the Belgian Congo and French Congo was routed via the Nile and Khartoum during the early part of the 20th century. Such items often have Sudanese stamps affixed to pay the additional postage through the Sudan. An area of southern Sudan, the Lado Enclave, was leased to King Leopold of the Belgians to facilitate the transport of produce from the Congo via the Nile route to Europe and other destinations.

Civil Censorship of mail was imposed from 1914 – 1918 on mail leaving and in some instances, entering the Sudan. Mail from the armed forces stationed in the Sudan was censored by use of a triangular civilian censor mark. Egyptian and Sudanese censor labels and straight line handstamps were also used.

Censorship was re-imposed for a short period in 1924 following disaffection by Egyptian troops which resulted in them being sent home to Egypt. At this time triangular censor marks were used on mail.

During the 1939-1945 war civilian mail was subject to a system of censorship which used a number of different types of label in conjunction with numbered triangular handstamps although in the early part of the war mail only a handstamp was applied to censored mail.

Wings over the Sudan – the coming of Airmail 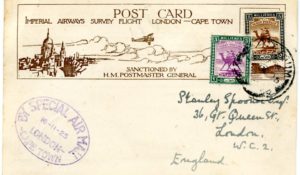 In 1914 Marc Pourpe, a French aviator flew from Cairo to Khartoum and back. He was followed in 1925 by Sir Alan Cobham’s pioneering flight from England to South Africa. Cobham was sponsored by Flight magazine and posted cards at stops throughout his trip including Sudan. Further flights were undertaken by Capt. W.E., Gladstone in 1927 to test the feasibility of a permanent airmail route. Imperial Airways established a permanent route to East Africa in 1931 which was extended to the Cape the following year. Pioneer and later airmails are widely collected.

In a country as large as the Sudan – nearly a million square miles, with a population of 28,000,000 it is uneconomic to provide large numbers of ordinary post offices although at least 800 have now been recorded. T.P.O’s form an integral part of the postal services and with few exceptions they are true travelling post offices halting at intermediate stations to provide a range of postal services. River T.P.O’s worked from a barge lashed to the side of the flat bottomed Nile steamers which were gradually replaced by the less picturesque diesel tug.

Precise dates of early T.P.O’s are difficult to establish but it is clear a link existed on the frontier with Egypt at the time of the reconquest of 1896-98. More than 43 different T.P.O’s have been recorded.

Victor Nahman was a self styled dealer with bases in Cairo and Alexandria. He is a well known character in Sudan Philately in that he ‘created’ a number of forged covers during the Reconquest / Military Period. There is nothing like forging your stock and when he saw the potential of re-conquest mail he had a ‘Feild’ day. CP’s 4, 10 and 12 describe some of his forgeries, as does an article by Peter Smith in Philately, Jan/Feb 1958, entitled ‘Forged Covers of the Sudan Campaign’.

The word ‘Field’ is spelt incorrectly (where it appears) on his self-styled covers, so say, from personnel serving with the re-conquest army. These covers are endorsed ‘Feild Service no Stamps obtainable’. He also forged other covers, such as postage dues. However if you have a Nahman cover do not immediately despair because there were some genuine covers associated with him too. Particularly some printed commercial envelopes.

The Nahman cover shown in figure 1 recently appeared in an auction where it was being offered as genuine. It is of particular interest because it ‘properly’ illustrates the use of the Egyptian 3 Milliemes on 2 Milliemes overprinted postage due. (The genuine article is very difficult to find and usually rather costly). Other similar Nahman covers exist carrying this stamp but are seldom seen in any auction these days. This cover is also endorsed “From Gr No. 74 W. Welshman” a name used by Nahman on other occasions but not appearing in the list of names given on page 6 of CP12. A bid was duly entered and the cover successfully secured, however the price was probably more that one should pay for such an item.

A few observations regarding the above figure.

The HALFA postmark is forgery HLF-F3. Oddly the figure ‘1′ is missing from the accounting mark. The CAIRE postmark has the ‘8′ of ‘98′ upside down as seen before on Nahman covers. The Cairo date is actually 18 NO 98. This mark is also suspect and probably also forged. Indeed, most of Nahman’s forged covers were never anywhere near a post office although some have suggested that the Egyptian marks are genuine. This is doubtful but It is true that all the stamps he used were genuine and with influence among his contacts it is not beyond the bounds of possibility that there was some cancelling ‘by favour’. The ‘T’ taxe mark is, as far as one can see, identical to one in use in Egypt and the Sudan at the time. However the same mark appears on all of his covers and the likelihood that all offices should have the same identical mark could be suspect.

Another cover which has recently surfaced is addressed to Tanta in Arabic. This is illustrated at figure 2. This cover is unusual as it is only the second such recorded with the address in Arabic. The other, also to Tanta , is described in CP10. Interestingly, this is endorsed, ‘Field service no stamps obtainable’ but is ‘Field’ spelt correctly and not in Victor’s hand. The marks on these two covers appear identical and the bisected 2mm postage dues appear to match each other exactly.

Regarding the cover above,

The address is written in blue crayon, to Tanta but not to Victor Nahman.

Again the HALFA postmark is HFL-F3. Here the cross bar of the T in the accounting mark is missing, a feature also seen before on Nahman covers. The TANTA postmark is identical, including the date, to those previously recorded on such covers and is a definite forgery.

It remains to say that Nahman covers occasionally come onto the market and members should be vigilant when purchasing material of the re-conquest period. One should however note that Nahman was at work when these stamps were current and consequently his covers are ‘of the period’. In some instances purchase may be worthwhile (to illustrate usage or some such point, or simply just to own a Nahman cover) but always remember that at resale the return could result in a hefty loss.