It is with deepest regret that we announce the passing of Colin Narbeth on 2 May 2020, at the age of 90.  We in the SSG have only just heard this sad news and a letter of condolence will be sent to his family on behalf of the Society.

Colin was probably best known as a collector of coins and banknotes and was the founder and driving force behind the creation of the International Bank Note Society in 1961.
He was also a dedicated philatelist who spent time at Stanley Gibbons (he was the force behind “Stamp Weekly”) before setting up his own coin and banknote business. In 1994 he joined the Royal Philatelic Society London and was elected a Fellow in 2004. 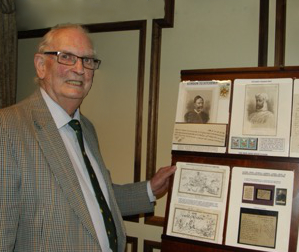 His favourite area of study was ‘Sudan’, particularly the pre-Independence period, which he combined with his love of militaria and old documents, resulting in marvellous displays at the SSG Conferences, one of which won the SSG Norton Collier Trophy in 2013. He also amassed an outstanding, possibly unsurpassed, collection of Sudanese postmarks. More recently he started collecting South Sudan stamps and was the first private collector to obtain an Independence Day Celebration Folder which China presented to a handful of senior South Sudanese officials on 11 July 2011at the official hand-over ceremony

He was held in great esteem for the knowledge he contributed to Sudan Study Group of which he was a long-time member, and for many years he was Newsletter Editor, a task he took to his heart and raised to new heights.

Always amicable and helpful, Colin was a friend and mentor to many fellow Sudan Collectors. His passing is a loss to Sudan and South Sudan Philately. He will be sorely missed and fondly remembered.