Six different types of overprint were used for this provisional series of eight values issued in March 1897. There was also more than one setting of the overprint and numerous varieties. It is a challenging area of study for the collector and student. 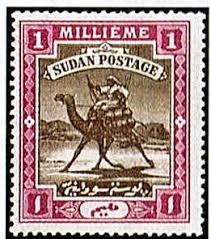 Camel Postman stamps replaced the overprinted issue in March 1898. Designed by Captain Stanton, an officer in Kitchener’s Army during the campaign to recapture Khartoum, they were used for more than 50 years and today still appear on Sudan stamps in a modified form. They are amongst the most colourful Sudan issues and popular with collectors.

The Gordon statue stamps of the 1930’s provide another area of study with changes to perforation, overprints and varieties as well as proofs, essays and colour trials. They were replaced in 1950 by a recess printed pictorial set.

Issue These stamps were printed in India and issued to meet shortages when the London printers were unable to supply the Camel postman stamps due to damage to their premises by enemy action.

The 1951 issue was a complete change in favour of a pictorial issue portraying various features of life and conditions in the Sudan. The Camel Postman design was retained for the 50 piastre value because it was ‘so closely connected with the origin and development of the Sudan postal Service’.

The 1962 issues also showed scenes of Sudanese life and kept the Camel postman stamp for the £S1 value. Later series, in 1991 and 2005 included stamps featuring Sudan flora and fauna.

The first sets commemorated General Gordon, the Golden Jubilee of the Camel Postman stamps and constitutional changes in the administration of the Sudan. Thereafter issues depicted many aspects of life in the Sudan and a wide range of historical, cultural, commercial and geographical subjects.

Postage due stamps were first issued in 1897 and consisted of overprinted Egyptian issues. They were replaced by the gunboat series (again designed by Capt. Stanton) in 1901 and continued in use until the 1980’s.

Special stamps were issued for use on telegrams between 1898 and 1901. They depicted a contingent of the Sudan Camel Corps crossing the desert and passing a line of telegraph wires. The stamps were perforated centrally to facilitate use on the receipt portion of a telegraph form.